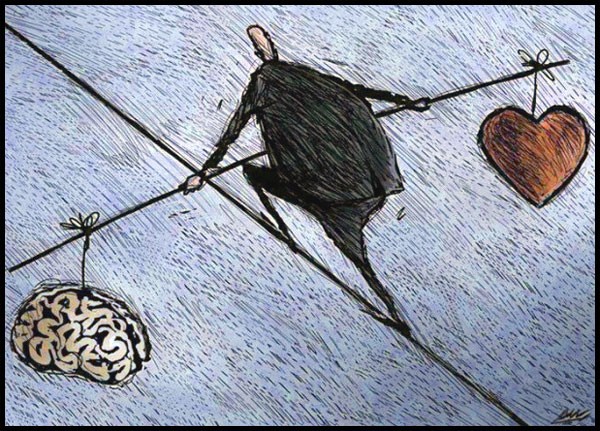 You hear that term “balance” a lot today.  Apparently, it’s the ideal for having a happy life.  Striving for balance is a real chore in some respects.  Almost always, we present our personalities in the extremes.

It’s a matter of wanting to be right vs. wanting to be loved, according to my observations.  I’m always stunned by people who feel a need to assert their opinions, in a bold and bossy way.  They don’t seem to recognize that they are at risk of diminishing love from friends and family.  They know that what they’re saying is provocative, and it will most likely start an argument.  They just can’t resist or restrain the temptation.

Social media is the perfect platform to pontificate through.  Maybe I’m being a hypocrite, since I’m communicating this to you through a blog article.  People argue on Facebook as if they will win everybody over to “their side”.  How realistic is that?  During the recent election, for example, I saw posts from people on both (or more) sides.  People talk about deleting friends, online and in real life, because they have a different point of view.  We had to stop talking to them, because they are narrow-minded, dim-witted, and don’t know anything.

But, if you never argue a point, people will say you are a dull person, and not much of a conversationalist.  If you never stand up and speak out for someone who is in need, people will think you are cold-hearted.

Finding balance in this area is what we used to call “choosing your battles”.  If you’ve ever been in a relationship, you know about this.  It’s important for parents and children, siblings, bosses, neighbors, coworkers, friends, and lovers… everybody.

It’s the fine art of conceding a point, even if you disagree with the other person on the whole.  It’s the practice of evaluating discussions and arguments as they occur.   Consider if this is the “point” that you must “win”.  We all talk about diversity, and acceptance of those who are “different”.  Can we start with people who hold different views than us?

How do we heal the “divide”?  The racial divide, the political divide, the religious divide? Stop dividing. Hold your own beliefs, and know what they are, but allow other points of view a seat at your table.  Celebrate our sameness… our humanity.