At work, I move the mouse over to the left side on shared computers when I’m using them.  Yup, I want to use the mouse with my left hand.  I don’t move it back to the right when I’m done.  I figure that you might have to move it if you use a computer after me.  But, consider that I have to move it EVERY time I use the computer, because it’s never set up on the left.

Most of you righties think that being left-handed is about comfortable scissors for us. And a lot of it is.  Maybe you think about desks in school.  If you’re not first in the classroom to claim a left handed desk, it’s tough making a go of writing assignments.  Do they still use pens and pencils in schools?  If they do, it might interest you to know that you can buy left handed writing sets on Amazon.  If you love a lefty, you can buy them a complete left handed College Set (Also available for left handed middle schoolers).   I didn’t even know that was a thing.

Other things you might not know were available for left-handed people:

Obviously, a lot of its marketing.  But there are some great ideas there.  So… being left-handed is a different mindset.  You are often the odd man out.  You may adapt, but some things are awkward.

You want to arrange your kitchen differently than the rest of the world.  When a look at a magazine, I like to browse from back to front.  With a juicy gossip magazine, it doesn’t make any difference, since the stories are two pages tops.  Bowling balls are tough, believe it or not.   You do, in fact, drag your hand through ink when writing. The alternative is making people stare as you exhibit the left-handed writing contortion technique.  Then, your hand stays clean, but you get cramps in weird places.  I prefer inky. 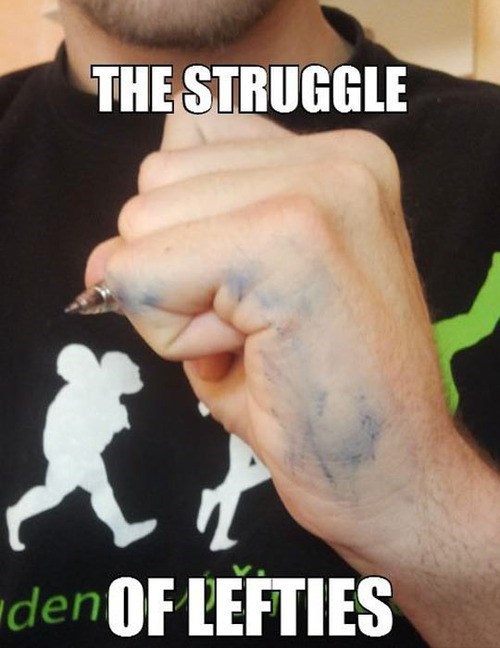 My Mom is left-handed.  None of my kids are left handed except for my stepson, Andrew.  My Stepfather is left handed.  When my Mom was growing up, they smacked you on the hands at school if you were left handed.  I’m glad they stopped that by the time I went to school.

When people notice that you’re left-handed, they feel obligated to remark on it.  It’s usually “You know what they say… left handed people are in their right mind.  HaHaHa!”  Here’s the joke I tell to left handed people who I meet:

“You know what they say about right-handed people?”

3 thoughts on “Being Left-Handed…It’s Not Just About Scissors!”