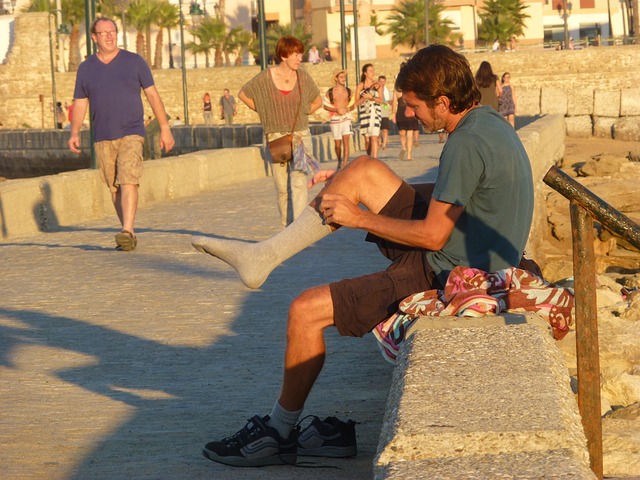 Warning… this post is full of nonsense and silliness.  I just had to share a moment from my work life.  First, some background.  I work with a diverse bunch of folks.  We come from a lot of different backgrounds.  I can think of at least five different languages that we can speak.  I’m one of a couple caucasians, and I’m the wise, old sage of the group.  We have a blast, and love to joke around.  So, my coworker, who happens to be caucasian like me, is arguing with someone in the back, but I can’t hear the conversation.

She comes up front and says to me, “Miss Cat, what does it mean if I’ve got a quitter?”  I didn’t have to think too long before I told her that I would think she had a sock that wouldn’t stay up.

We’ve all had that feeling of dread.  You put your socks on in the morning, and everything’s fine.  As soon as you get out of the car and start walking around, you feel it gradually… or not so gradually, slide under your foot, inside your shoe.  It’s going to be a long day.  You’ve got a quitter.

When I answered Natalie’s question, she was thrilled. “I keep telling them that, and they wouldn’t listen.”  So next up, Cafiann, who comes from a Caribbean background, says “We just say the neck is broke”.  Nobody recognizes that one.  In fact, most of the others don’t even have a name for this syndrome.

So the group decides on the spot that quitters are a caucasian thing.  They suggest I write a blog post about it.  I could call it “White People Be Like”, after the popular memes on the internet.  We laughed so hard that I think we must have scared some customers away.  I thought it was funny enough to share with you, but I chose a milder title.

As a follow-up, I asked one more person today.  Stacey is also caucasian, and I figured this would settle it.  Guess what?  Turns out she’s never heard of the infamous “quitter”.  There goes the whole theory.  It’s maybe just a coincidence that Natalie and I both refer to the devil’s sock by the same name.

Hmmmm… just when you think you’ve got life figured out.